← more from
Hen House Studios
Get fresh music recommendations delivered to your inbox every Friday. 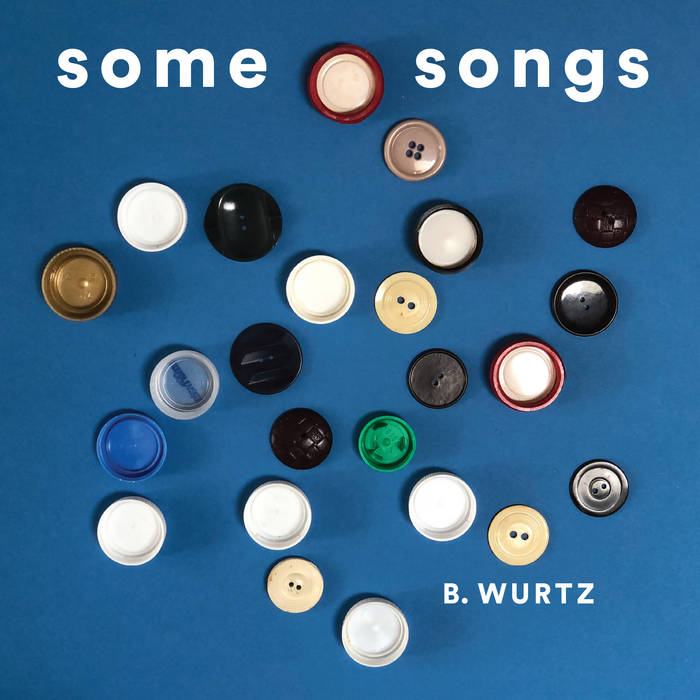 “B. Wurtz’s music is honest… He lives in a dimension that exists in the upside-down reflections in a spoon on the tablecloth sitting on the breakfast table at Lou Reed’s house, if Lou Reed lived in Mr. Rogers’ Neighborhood and Brian Eno was the mailman.” – Micah Nelson (Particle Kid)

“These songs move through so many contours of ideas and states of being… from playfulness to gently nuanced warnings. Full of love and loss and things intricately observed. B. and his collaborators ensure fascinating twists that make the journey from the first note to the final poetic, one ever worth taking (again and again).” – Kristy Edmunds, Executive & Artistic Director Center for the Art of Performance at UCLA

Revered visual artist B. Wurtz releases his debut album, Some Songs, on October 16 via Hen House Studios. B. Wurtz began studying piano as a child and taught himself guitar as a teen. He also drew and painted. Late in high school his piano teacher urged him to consider a musical career but instead he felt compelled to focus intently on his art practice and has remained an artist to this day. His interest in listening to music has never flagged but performing was not part of his life again until a few years ago. In 2016, his wife Ann gifted him a guitar for their anniversary. While relearning initially proved difficult to uncalloused fingers, a mind sharpened by conceptual art work quickly formed its own refined songwriting approach. YouTube tutorials helped him produce demos on Garageband. He later added lyrics that blended philosophical thought with direct observation; birds and clouds passing outside his windows, signage on New York subways, a clock on his shelf. What resulted is Some Songs, an album produced by Harlan Steinberger at Hen House Studios in Venice.

B. elaborates: “In 2018 I had a survey exhibition of my art at ICA Los Angeles. At the opening party I met Harlan Steinberger, who told me he was a music producer. Later he sent me an album he had just done with Sunny War. I loved it… That led to an amazing collaboration with Harlan and several other truly great musicians, including Sunny and Micah Nelson (aka Particle Kid). Thus the album came into being… I thought of the songs I had written as basically being pop music, but resulting from the mixture of things that influenced me -- classical music (i.e. Bach and Mozart), ‘60s pop/rock (i.e. The Rolling Stones), country music (i.e. the Carter Family) and traditional American folk music (meaning mountain and southern music as well as shaped note, sacred harp music). I had no overriding theme in mind for the album. The music and lyrics just seemed to enter me, coming from somewhere else. I find that fascinating. I followed the same pattern for writing all the songs, first the chord structure, then the melody, and finally the lyrics. It’s very fun, like putting a puzzle together.”

Each track on Some Songs is accompanied with a music video by acclaimed photographer and filmmaker, Randi Malkin Steinberger. In her words: “Matching the sophisticated simplicity of B. Wurtz’s music was the beauty and challenge of making a visual companion to Some Songs. Images gathered from my own films and found footage, as well as from short videos shot by B. on his iPod Touch under my direction, are manipulated and strung together in a layered collage of visual sentiments - mostly done while under quarantine. My studio is in the same building as The Hen House where B. and the band recorded. My husband Harlan produced the project and so I had the luxury of witnessing the album as it evolved. Images swam through my head throughout the process, leading to discussions about me creating videos. I went on to actualize 14 videos that ultimately became the video accompaniment for B.’s magical songs… What an honor it was for me to take on that challenge of making a visual companion to his music.”


About B. Wurtz
B. Wurtz was born in 1948 in Pasadena, California and lives and works in New York. He received an MFA from the California Institute of the Arts in 1980. For over forty years, Wurtz has transformed the minutiae of daily life into poetic sculptures, drawings, and assemblages. Items such as food tins, clothing, plastic bags, mesh produce bags, and yogurt containers are transformed into elegant meditations on form and line while simultaneously underscoring the artist’s commitment to the ethics of reuse. In 2015, he was the subject of a retrospective exhibition at BALTIC Centre for Contemporary Art (Gateshead, UK) which traveled to La Casa Encendida (Madrid). He has exhibited all over the world, including MoMA PS1 (New York), Moderna Museet (Stockholm), Museum of Contemporary Art (Chicago), among others.

CDs and a 3 sided vinyl album with a a B. Wurtz photo print on the 4th side are available at various online retailers.

A limited edition vinyl including a B. Wurtz original signed mixed media artwork is available only at HenHouseStudios.com.

Revered visual artist B. Wurtz began studying piano as a child and taught himself guitar as a teen. In high school his piano teacher urged him to consider a musical career but instead focused intently on his art practice and remains an artist to this day. In 2016,  with a mind sharpened by his conceptual art work he quickly formed his own refined songwriting approach resulting in "Some Songs". ... more

Bandcamp Daily  your guide to the world of Bandcamp

Kari Faux drops off her deluxe album 'Lowkey Superstar' plus tunes by Shunaji and Samplelov.